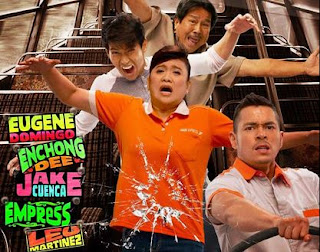 Tuhog tells us three different stories of three people from varying walks of life – Tonio (Leo Martinez), an old man who impulsively decides to pursue his dream of becoming a baker after he retires; Fiesta (Eugene Domingo), a city bus lady barker who projects a tough exterior but is really longing for parental and romantic love; and Caloy (Enchong Dee) who vowed to preserve his virginity for his girlfriend but is becoming tempted by another girl as their relationship starts to break apart. These three lives are brought together in a tragic bus accident, and the circumstances (Clue: it is reminiscent of an episode of Grey’s Anatomy) lead to having to choose not who among them lives, but who among them must sacrifice and die.

The idea of interconnecting different stories in one plot is no longer new to us. Films by Alejandro González Iñárritu like “Babel”, “21 Grams”, and “Amores Perros” are some foreign examples (although the intersection of stories in these films is more complex), while locally we have Yam Laranas’ “The Road” as one of the closest examples. “Tuhog” pretty much follows the same pattern, with the film introducing us to each lead character then showing us how their lives are really connected from the start. The film demonstrated this simply yet effectively, with the impalement or “tuhog” serving as a metaphor for the linked lives of these dissimilar characters.
Even though it is easy to tell that each story is directed with the same style, the film was successful in making each narrative unique. Tonio’s story revolves around family relations and the acceptance of old-age. Fiesta’s focuses on finding love and the struggle to be at peace with oneself. Caloy’s is a lighter story about infatuation and adolescence. With each story filling a certain niche, it became relatable to a wider audience, which was further reinforced by the fact that this movie is a dramedy. It makes you laugh at reality, not at senseless jokes and corny slapstick. The film was funny because it was true.
The movie carefully invests in each narrative, making sure that you know the characters well – their motivations, their struggles, the situation that they are in. It makes you feel attached to each character, so that when the time comes when you have to choose who among them lives or dies, you also get a share of the burden and weight of having to make a decision. It engages the audience by making them think and decide among themselves, by making them choose.
I don’t know what it is about Eugene Domingo, but she always gives me the impression that every movie that she stars in would always be worth watching. So far she has been consistent with that. Her acting always felt real, unlike the usual mainstream actors we know. I wasn’t surprised that Leo Martinez and Enchong Dee also delivered outstanding performances, but they did exceed what I was expecting from them. They levelled with the sincerity of Eugene’s genuine acting making all three of them owning the whole movie, without one upstaging the other two.
What struck me the most though after watching the film, is the message that it gets across. It tells us about the certainty of death, but also empahasizes at the same time that it is in this certainty where we find the beauty in living. If it was your last day on Earth and you look back to how you lived your life, would you be able to say that you are happy and satisfied with how you lived?

Credits to all the images and videos used in this post go to Tuhog and/or to their respective owners. I do not own these materials. No copyright infringement intended.