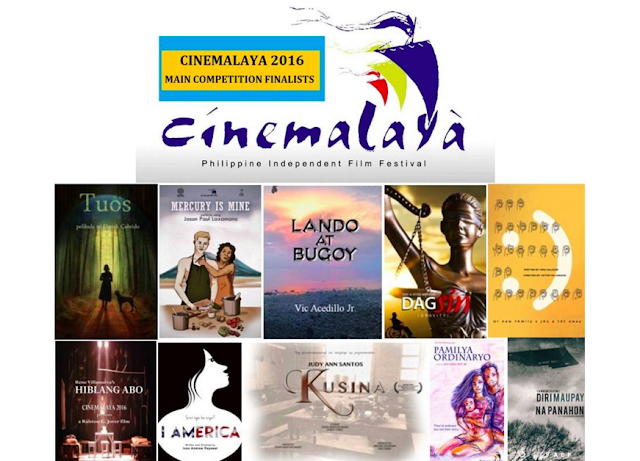 SYNOPSIS: Elena is chosen to be their village’s “Binukot”, a maiden chosen to be the fairest amongst the women in her village, confined inside her house, never allowed to go outside. She is chosen to keep the oral tradition alive, memorizing the chants and performing it. She is to pass the title and responsibility to her granddaughter Letty. When sanctity of the “tuos” becomes threatened, putting Letty in danger, Elena realized that she cannot just stand aside. Elena finds herself coming face to face, literally, with the ghosts of a tradition, which shackled her into a life of solitary confinement.

MERCURY IS MINE
Writer and Director: Jason Paul Laxamana

SYNOPSIS: Carmen, a middle-aged cook, is about to close down her eatery at the foot of Mt. Arayat when a white American teenage boy named Mercury approaches her and begs for work in exchange of nothing but shelter.

SYNOPSIS: Disrespected by his teenage son, a 40-year-old High School dropout tries to solve this problem by returning to school which only makes his son hate him even more. Amidst the struggle between them, an unexpected event changes everything.

SYNOPSIS: After surviving the Death March, Martial Law and the loss of his legs, Justino became an atheist. But when his wife dies, a part of him is yearning to believe in life beyond death; just for a chance to be with her again. Searching for parts of her he can still hold on to, he devours her diaries for information into their past –opening a Pandora’s Box of secrets.

SYNOPSIS: A religious man who does petty crimes, Ponching, gets into a new venture, text scamming, thinking it will not really hurt anyone. One day, his seemingly “innocent” text scam accidentally cons a recipient into thinking he is the bastard child of their late relative.

SYNOPSIS: “Hiblang Abo” speaks volumes of muted memories and infinite struggles among four men in their twilight years, confined in a hospice facility or home for the aged. Their gray hair grows and fades unnoticed, their lives enter the void of oblivion. Everything unfolds so naturally into their swan song until their body pains and heartaches yield the same intensity, when their hearing and their feelings become permanently impaired; and when their blurry vision and memories become “clear” signs that the inevitable state of death is as fleeting as the vibrancy of life itself.

SYNOPSIS: “I America” is a dramedy about a complex half-Pinay, half-Caucasian lady looking for American living in Olongapo City (Philippines) who tries to get her passport and US visa in order to meet her father personally for the first time.

SYNOPSIS: “Kusina” (The Kitchen) is the silent witness to the life and love of Juanita. It is her sanctuary, the place where she creates dishes for her family, her friends, even enemies and strangers. Through cooking, she gets to know the people around her, and in return, reveal herself to them.

SYNOPSIS: Jane and Aries are teenage parents. They make a living out of stealing on the streets… until fate hits back at them.

SYNOPSIS: In the aftermath of Typhoon Haiyan, an escaped prisoner finds his mother and his ex- girlfriend in a plan to flee the city. But when his mother insists on staying, his newfound freedom and even his life are eventually jeopardized.

Credits to the images and materials used in this post go to Cinemalaya and/or to their respective owners. I do not own these materials. No copyright infringement intended.