Singing in the Snow: A “Frozen” Review 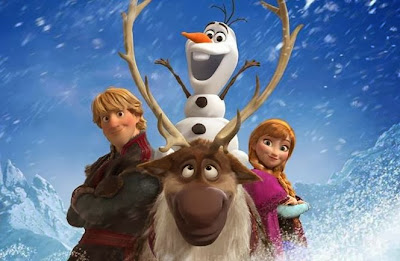 Before I saw Frozen I already saw a couple of not-so-happy reviews online, plus I didn’t think that the premise was something new so I wasn’t really that excited about seeing it. But hey, this is Disney so I thought I’d give it a chance. And I’m glad I did!

Elsa and Anna are princesses in the Kingdom of Arendelle. Elsa though is a bit more special as she is born with the power to create ice and snow. After accidentally hurting her sister with her powers, Elsa locks herself within their palace, afraid of hurting anyone else with her unique abilities. During her coronation day however, she accidentally put the whole kingdom into an everlasting winter, and it’s now up to Anna to find a way to save the kingdom and her sister.

I initially thought that this was going to be one of those typical evil step sister stories where our damsel in distress gets bullied by her nasty sibling but eventually gets the better of her in the end. It turned out to be a whole lot different and more unique than that. The conflict in this movie comes more from the predicament that our lead characters are in, instead of it coming from a bad guy. But yeah, there is going to be a bad guy *wink wink*.
Right at the start of the movie I already loved the scoring – it felt so…well, Disney. What surprised me more though was the fact that the movie was actually a musical. At first I was a bit unsure with how I feel about all the singing because at some point I thought that it’s either I already outgrew Disney movies or the musicality of the film just sucks – but hey, the music turned out to be good and even reminiscing as a whole so I stopped complaining.

I loved how the movie’s approach reminded me of the fairy tales I used to read about as a kid. Watching the movie felt like reading or listening to one of those stories again. It was magical, curious, and most of all, witty. The movie brought back the kid in me yes, but at the same time, the older guys may also have as much fun with this film through the cleverness of the script and the charm brought to the characters by the voice actors. Great job as usual, Idina Menzel and Jonathan Groff. No wonder I still loved the music in spite of the slight turn-off when the characters suddenly break into a song number, High School Musical style.
Mind you, this film wasn’t also that predictable. As I watched the movie I have been wondering how the characters would turn out in the end, like who would be with whom, and what happens to whomever. I won’t spoil you with the details of course, but you should watch out for an unexpected but necessary twist in the plot.
Frozen just reinforced my love for Disney movies. It can make you reminisce of your storytelling moments when you were a kid. Making it a musical was a risky move, but it turned out well in the end.
And oh, I know this isn’t the usual for Disney movies but stay around until the credits are over. There’s a post-credits scene that you might want to see.

Credits to the images and videos used in this post go to “Frozen” and/or to their respective owners. I do not own these materials. No copyright infringement intended.