Just like what everyone was saying, Pacific Rim was Gundam, Evangelion, and Godzilla rolled into one. This film is every young boy’s fantasy! A movie by Guillermo del Toro about gigantic robots battling it out against big-ass, monstrous aliens – tell me why you wouldn’t want to watch this one? 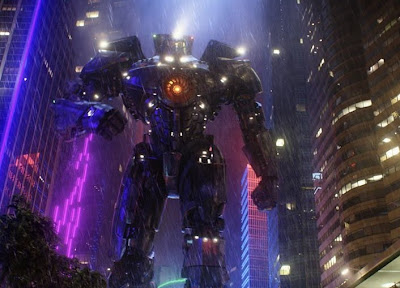 Set in the year 2025, giant alien monsters known as “Kaijus” have been attacking different countries around the world. They come through a dimensional rift in the Pacific Ocean which serves as a portal between their alien world and ours. To combat these giants whose sole purpose seem to be to wipe out humanity, the countries of the world set aside their differences and started the Jaeger Program, which led to the construction of badass humanoid machines called – yep, you guessed it – “Jaegers”, to take on the invading Kaijus. However, with the frequency of the Kaiju attacks increasing together with their adaptive strengths, humanity has to find a way to completely stop the alien invasion once and for all. 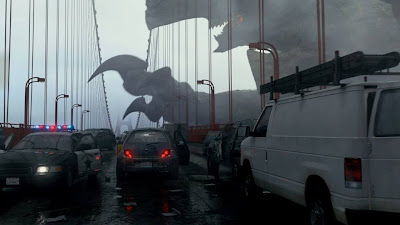 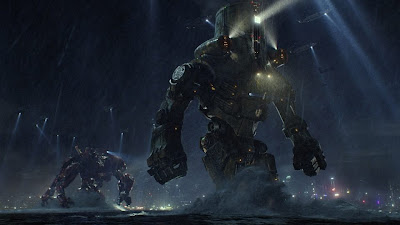 The most interesting part about Pacific Rim, aside from the epic clashes between the Jaegers and the Kaijus, would be its fresh take on the alien-invasion genre. Ever since I can remember, when we think of movies about aliens wanting to take over planet Earth, it’s always about invaders coming from the skies in their alien ships, terrorizing us with their alien weapons, and making fun of our primitive technology with their alien intelligence. Pacific Rim thinks outside the box in this department. When we were looking up to the skies for the extra-terrestrials, Pacific Rim gives them to us from deep in the ocean. When we were expecting high-tech machines to be used against us, they gave us gargantuan monsters. Just when we were getting tired of the usual alien-invasion clichés, Pacific Rim comes along sparking the interest in the genre once again.
Quick Trivia: “Kaiju”literally means “Strange Beast in Japanese while “Jaeger” is German for “Hunter”.
The idea of having more than one ranger to pilot the Jaegers was also one of the best things that I loved about the movie. The concept of “Drifting”, which creates a neural connection between the two pilots in order control the Jaeger together, has so much melodramatic potential and del Toro seemed to know this well enough that he made the movie invest so much on this concept. Amidst all the humongous fighting and destruction, this is where we find soul in the movie. Drifting pushes the idea that regardless of differences such as race and beliefs, humanity needs to understand and connect with each other in order to survive.
Speaking of the fighting and destruction, I am impressed with how the movie is able to make every action sequence clear and comprehensible. Unlike Transformers which becomes utter chaos on fight scenes with all the cars flying around, buildings collapsing, and robots getting it on with each other until you can barely make out what exactly is going on, Pacific Rim was easy to grasp. All the combats were clearly demonstrated and it was easy to tell who’s fighting who or what’s hitting what.
I have to admit though, the movie did not invest much on the script and character development. In spite of it being rich on the background and concept, the characters felt like they were just put there to get the storyline running. We were given one-dimensional cardboard cut-outs to follow, and aside from the part about “Cancelling the Apocalypse”, the script wasn’t very memorable or moving either. The movie was able to make up for this though through spectacle, action, and fun – which were what I think it’s after in the first place. And hey, I enjoyed it so much so I’m not complaining!
The background and the premise, were very well established. The film doesn’t just give us the situation, it also describes it to us in detail. We don’t just see the Jaegers fighting off the aliens, we also see the culture that was created after all the years of Kaiju invasion – the underground trade of Kaiju body parts, the religion and beliefs formed, the lifestyle created, even the capitalization of the concept of robot champions and evil monsters. The film gives us not just the perspective of the heroes on their “towers”, but it also takes us on a walk among the civilians and victims so we see the war from their standpoint – giving us a clear perception of the context. 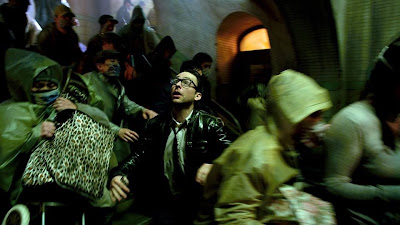 We also see an unconventional love story – where our leads don’t necessarily fall head over heels in love, but instead they learn to understand each other through a literal sharing of thoughts and memories. I also liked the fact that this time, our leading lady wasn’t a poster girl with boobs bouncing with her hair as she runs from explosions in slow-mo. Here we have the badass Asian lady, who in other movies would have ended up as a sidekick or one of the bad guys.
I also have to mention the subtle yet obvious suggestion of power by giant countries in this movie. At the time where the film is set, only four Jaegers remained – Gipsy Danger of the US, Crimson Typhoon of China, Cherno Alpha of Russia, and Striker Eureka of Australia – it’s as if the film was saying that these are the most prevailing countries, the only ones capable of handling powerful weapons and saving us all. I won’t deny that the movie has these undertones, covertly implying not to mess with these big guys, unless you want some destructive robots on your country’s backdoor.
Pacific Rim is certainly the saviour of the alien-invasion genre, which I personally felt was already dying because of the typical themes that these types of movies keep on recycling. It was fresh, innovative and definitely loads of fun! There has also been talks of a potential sequel and exploration of the ideas of a Pacific Rim – Godzilla crossover and even a Kaiju and Jaeger merging so be on your toes and keep your heads up.