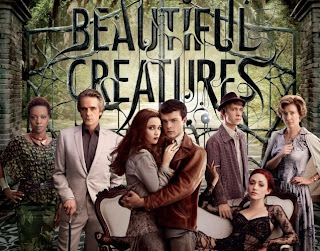 It took a little bit more effort in trying to convince myself to watch Beautiful Creatures because I was afraid that it was going to be some sort of reincarnation of Twilight (check out my review of Breaking Dawn here). God, those vampire movies were excruciating to watch, I had to walk out when we watched it on DVD. Good thing though that the last movie had some good fighting in it, I hate to admit I actually liked that part.
Beautiful Creatures is no Twilight (thankfully), although it would give you the impression that it is at the start of the movie. Nothing new here really, just another love story with a magical twist to it. If Twilight is a pokerfaced damsel in distress with a magical, fairy-vampire hybrid of a boyfriend, Beautiful Creatures is the mirror opposite. This one has popular jock-type with a powerful witch…sorry I mean “caster” for a girlfriend. Check out the Beautiful Creatures trailer :

The movie was based on the young adult novel by Kami Garcia and Margaret Stohl of the same name. Apparently, Beautiful Creatures is only the first of several books in the Caster Chronicles Series.

Beautiful Creatures is the love story of Ethan Wate (Alden Ehrenreich) and Lena Duchannes (Alice Englert), the latter having just moved to Gatlin in South Carolina. Ethan has been having dreams about Lena even before they met, which is kinda creepy but it gets creepier when Ethan finds out that Lena is actually caster, someone who is able to wield magic. The whole story basically revolves around the conflict that when Lena turns 18 (it’s always 18 isn’t it?) she goes through what they call a “Claiming” where it would be decided whether she becomes a dark caster, or a caster of the light. You might think, if she’s really good deep inside why worry, but there’s always no easy way out on stories like these. Apparently a curse goes on in her family where all the women gets turned to the dark side…okay, why am I suddenly reminded of Darth Vader?
What I liked about the movie is it added an air of mystery to the existing love story. We all know from the start that our two main characters would end up together in the end so that’s the boring part. But the movie prolongs the feel of secrecy that it would keep you glued to the screen for wanting to find out what’s really up with Lena and her family. At some point the movie reminded me of the X-Files and that was good.
The main characters weren’t one dimensional. Lena wasn’t just a loner and Ethan wasn’t just a hot jock. It is also nice to see some fresh faces on the screen and Alden Ehrenreich and Alice Englert’s chemistry worked wonders that the girls beside me in the cinema were giggling a bit too louder than they should (tsk tsk). Alden Ehrenreich is a charmer, I’d have to give him that. Lena’s family in the movie also reminded me of The Adams Family and Meet the Robinsons. Personally though, I think Emma Thompson wasn’t the best actress to portray Lena’s Mother, Sarafine. She was great in being the delusional Mrs. Lincoln but as the main bad guy, I don’t think so.
See also
geoffreview·
Movies
·October 20, 2013 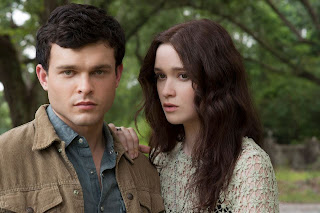 For a movie about magic, the CGI in Beautiful Creatures sucked bigtime. There were times when you’re starting to get drawn into the scene but then there’s CGI and okay, you’re back to reality.
I’d say Beautiful Creatures would appeal more to the young adults and teens. It isn’t mind-blowing and I doubt that they were aiming for that, but it’s the type that would intrigue you and make you stay on the channel when you see it on TV. It’s cute and funny, but I still don’t get why it’s entitled Beautiful Creatures in the first place.
Credits of the images  used in this post go to the Beautiful Creatures Facebook Page. I do not own these images. No copyright infringement intended.