Adlibing the Apocalypse: A “This is the End” Review 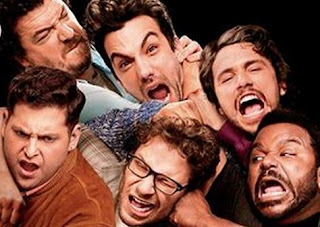 Watching “This is the End” made me wish that my friends were as crazy – although frankly if they were any crazier they’d probably be in a mental institution already.

All the actors in this movie portray fictitious (or not) versions of themselves. Jay Baruchel and Seth Rogen go to James Franco’s housewarming party in LA where they meet other Hollywood stars like Rihanna, Michael Cera, and Jonah Hill to name a few.  The party becomes how you would imagine a celebrity’s party would be – with lots of drugs, sex, and senseless small talks. However, the party takes a horrible turn when a powerful earthquake occurs, killing most of Franco’s guests. Jay, Seth, and a handful of other survivors lock themselves inside James Franco’s house to wait for a rescue. However, they soon realize that the earthquake is just the tip of the apocalypse iceberg.

This is the End Trailer

As I was watching this film I can’t help but imagine how these guys were probably having so much fun when they were making this movie. I mean seriously, this is how the film really felt like – that these buds really just wanted to hang and the movie was just some good excuse for them to do so. Everything about it felt so spontaneous and stupidly funny that it’s not hard to imagine that these guys probably just had an outline for a script and the rest was just some huge, hilarious adlib.
And this approach worked so well! Probably because the actors in this movie are already comical on their own, and it’s not really hard to just put them on a scenario and expect them to do something that would make the whole situation hilarious. The best thing about it is that since they are portraying exaggerated versions of themselves, they ended up making fun of themselves as well. This just reinforced the idea that these guys were just really having fun, and they’re letting us get a share of it through the film. There’re lots of goofing around, lots of references to their real lives, and a whole bunch of college humour that you’d wish that you’re with these guys when the actual apocalypse happens.
Everyone in the lead cast was memorable. The movie though follows Jay Baruchel who was the “new guy” who’s forced to socialize with everyone else – making him the character that the audience can anchor on and relate to. The recipe of Jay’s reasonable character mixed with hysterical characters of Seth Rogen, James Franco, Craig Robinson, Jonah Hill, and Danny McBride resulted into a mash-up of crazy and funny that you’d want them to stay together all the time. As expected, there were a lot of cameos in this movie including Rihanna, Emma Watson, and Michael Cera – who in spite of his limited screentime was able to leave his mark of awesome in the film.
This is the End is the kind of comedy where you just let the ball go rolling and expect tons of fun to come out of its tracks. The fun in this movie was not stiff, but something that was spontaneous and random. The amazing cast was able to transform the simple apocalyptic premise into one big, hilarious adventure.

This is the End Cast

Credits to the images and videos used in this post go to “This is the End” and/or to their respective owners. I do not own these materials. No copyright infringement intended.