A friend once told me that on Cinemalaya Festivals, there are films that are notable and memorable, while there are also entries that just blend with the background. “The Diplomat Hotel” was the first Cinemalaya film that I watched in this year’s festival and sadly, if I were to classify it based on my friend’s classifications, I’d have to put it on the latter category. 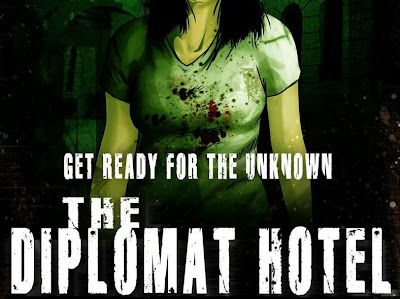 “The Diplomat Hotel” tells us the story of Veronica, a discredited reporter who lost her career because of one controversial scoop. Eager to get back to her passion, she half-heartedly accepts an assignment which requires her to spend one night at the infamous Diplomat Hotel, known for its bloody past and haunted history. As Veronica and her crew spend the night and cover the place, disturbing events take place.

I know what you’re thinking; this kind of plot is not really new to us. More than a few moviegoers are probably already familiar with the “group-of-people-exploring-haunted-place” plot of a horror story, as we’ve already seen this in films, both foreign and local, and even in TV shows. What would have made this movie stand-out, is the fact that it is shot within a real-life haunted place, adding some hint of truth and authenticity to what goes on in the film. However, the movie was not able to fully exploit this potential and the “given” fear that was supposed to be already provided by the setting itself, gets lost because of the weak script and poor acting performance.
Yep, I actually felt that the acting was weak in this movie; which is strange since I’ve seen most of these actors such as Art Acuña, Nico Antonio, and Mon Confiado in other films where they delivered outstanding performances. In “The Diplomat Hotel” however, the portrayal of the characters were less genuine and too stylized, far from the “Acting Without Acting” performance known in Indie movies. Gretchen Barretto, although she does have the look, failed to deliver in being an aggressive reporter. All that she was in the movie was the leader of the pack exploring the ruins, but she wasn’t able to portray much the journalist part of her character.
The scoring contributed a lot in creating the haunted atmosphere that the movie is set in, however this was ruined by the weak script. The lines were flat and the conversations were dull and anti-climactic, which distracted me a lot of times just when the thrill starts to pick-up.
What made me disappointed with “The Diplomat Hotel”, is that it does not go out of the box in exploring the horror and suspense genre. To me, everything about it was typical, from the scaring tactics, to the style, right down to the storyline. Knowing that this is an indie movie, I was expecting it to be more outrageous, aggressive, and less conventional, given that this is not confined within the boundaries of mainstream production studios. It turned out however, to be no different from the local horror movies I’ve already seen as a kid.
The thought of a horror film being shot in an actual haunted place is intriguing, making the film more believable and realistic. “The Diplomat Hotel” had this advantage, but this edge got lost because of the poor execution.

Credits to the images and videos used in this post go to “The Diplomat Hotel” and/or to their respective owners. I do not own these materials. No copyright infringement intended.