I often see “A Serbian Film” in posts talking about mindfuck movies, banned films, or in one of those “Top 10 Movies that will scar you for life” listicles. For the longest time I wasn’t particularly eager about seeing it given what I’ve been reading about it online but eventually, reverse psychology started kicking in and I started to want to see the movie mainly because everyone’s telling me not to.  I gave in to curiosity. The forbidden fruit tastes so much sweeter after all, yeah? 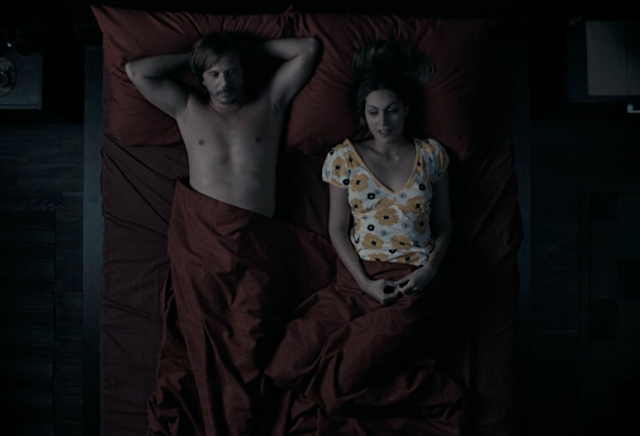 Miloš (Srđan Todorović) is a retired porn-star who settled down to become a family man. He is living a quiet life with his wife Marija (Jelena Gavrilović), and six-year-old son, Petar (Luka Mijatović) when a former co-star offers him a role in an adult art film by an enigmatic director named Vukmir (Sergej Trifunović). With the financial security of his family in mind, Miloš reluctantly accepted the offer in spite of most of the filming details being kept from him (supposedly for art’s sake).

The film already gives you hints of shock value right from the start, but it gets even weirder as the storyline progresses. You’d think that the build-up would prepare you for what’s to come, but once we get to the part where the characters start filming their movie, we go on a dizzying barrage of butchery and rape that’s gonna put the the Human Centipede to shame.  Unlike the mentioned surgical cult film that is remembered primarily for one shocking scene in its climax (with several supplementary ones on the side), A Serbian Film effortlessly overshadows similar movies with its consistency in showing violence and shock for the most part of the movie. The next gore scene is as equally gut-wrenching, if not worse, than the previous one.

Frankly, as I was seeing the film I did not get any impression of it being a sociopolitical parody of Serbia. If you ask me, any metaphors that the film supposedly had would have been drowned by the extremely graphic scenes. If the movie did have political representations, it failed to communicate this to the audience because the gore and violence would overpower the viewers’ senses. I didn’t see  a nation being abused or a government stealing from it’s people. All that I saw were individuals being raped, butchered, and preyed upon by masochistic and opportunistic villains.

In spite of all the bloodshed and taboos,  it can’t be denied that A Serbian Film’s  cinematography is visually stimulating. The dark and sometimes trippy visuals give off an indie-film feel yet it also exudes an impression of being well-budgeted and professionally done.

The movie doesn’t lose its film-within-a-film aura, and I’m sometimes left wondering whether as a viewer I am still watching the movie per sé (the story of Miloš), or have I been transformed into the observer who watches the film being made by the characters. This has been reinforced by the brilliance of Srđan Todorović performance, which breathed life to Miloš, and served as a steady anchor for the film’s plot.
***
You may have to have a strong stomach to go through A Serbian Film. The discomfort that you may feel not only comes from the physical abuse that the characters are getting, but also from the emotional trauma and destruction of the “survivors” in the movie. You know what, “discomfort” now sounds  as an understatement.
Oh and at some point in the movie you’d encounter the concept of “newborn porn”. Any ideas of what it’s about?