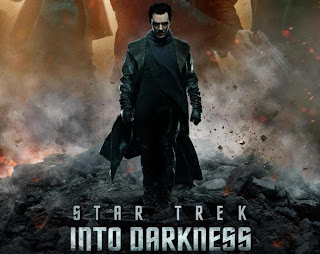 I have a confession. I have already seen all the Star Wars films (or at least every one that has already been released), but Star Trek…um, this is going to be the first one that I’ve seen from start to end.
This means we are going to review the movie at a stand-alone perspective. I’ll tell you how I felt about Star Trek: Into Darkness regardless of the previous Star Trek installments and not considering Star Trek technicalities (because I don’t know them!!!). Just look at this from the bright side – at least I’m not going on geek mode and start ranting about what this movie should have been, just like what I did with Iron Man 3’s Mandarin.
The Starfleet Headquarters has been an attacked. With several of the high-ranking officials killed, Captain James T. Kirk (Chris Pine), together with Spock (Zachary Quinto) and the rest of the USS Enterprise crew, warps to Klingon, homeworld of Kronos to pursue and capture the man behind the plot, Starfleet agent John Harrison. Captain Kirk however, finds out the motive behind the attack and now he has to decide which side he’s going to take.
Okay so this is what Star Trek: Into Darkness is in a nutshell: Fast, Funny, and Fashionable. Seriously, have you seen their outfit? So post-modern. Except the tights. Nobody is cool with tights.
Star Trek: Into Darkness is packed with action all throughout. Right at the beginning of the movie we’re already given a dose of adrenaline, and as the movie progresses it makes you feel that everything that goes on has a sense of urgency. Everyone is in a hurry and at the peak of their adrenaline rush all the time. This is a no-shit, no-nonsense film. Just pure, awesome, sci-fi action at its finest. 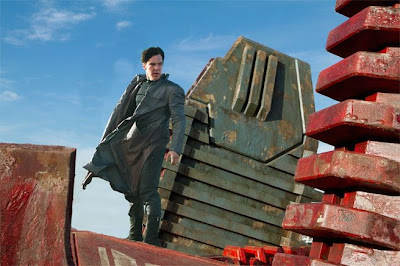 What could probably be the most enjoyable element of the film aside from all the laser gunfights would be its humour. If Iron Man and the Avengers got Tony Stark to do all the comic relief, Star Trek has most of the lead characters contribute one or more clever lines of their own. All the leads have unique, interesting personalities given that they are from different races, and the script was able to take advantage of each character’s peculiarity in injecting wittiness to every scene. Spock’s uptight, dull personality for example works so well when paired with Captain Kirk’s energetic, stubborn persona and the arguments between these two makes me think of Sheldon Cooper ranting at Leonard for taking his spot. 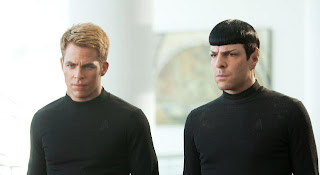 Taking this movie from the perspective of someone who previously haven’t watched a whole Star Trek movie from start to end (dude, don’t judge me), it was pretty much understandable, so you don’t really have to be a Star Trek fanatic to appreciate this one. It can stand on its own, and it’s still fun to watch independently. So much fun that now I’m actually thinking of watching the previous installments, then watch this sequel all over again to appreciate it more.
And by the way, I didn’t watch it in 3D but I still enjoyed it. Although I can imagine that all those lasers and floating debris would probably be more fun to watch in more than 2 dimensions.
Credits to all the images used in this post got to Star Trek: Into Darkness and the Star Trek: Into Darkness Facebook page. I do not own these images. No copyright infringement intended.